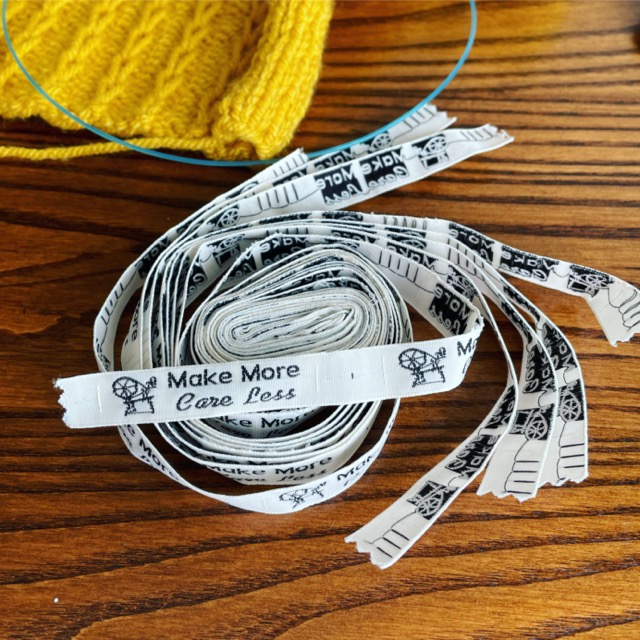 One morning, a few weeks ago, I was seized by a sudden and violent need for custom-woven labels to sew into my handmade stuff.

That’s pretty much the whole story; I bought them, and now I have them, and I’m super-happy and adding them into everything I make and have made. tl;dr I guess?

Okay a few more words. Back when I was making things for myself as a kid/teen I had my own brand; it was called ‘mint sauce’ and the logo was a picture of a cartoon sheep with a couple of mint leaves behind its ear. I made some tags that I put on bits of jewellery I made, and I even embroidered a little label for a skirt I made that I was particularly proud of (a 3/4 circle skirt made from a remnant of purple floral polycotton that was actually good enough to wear and I still miss, sometimes). But then I completely forgot the notion until that fateful day last month.

I don’t really know where the urge came from this time; except that it was 5am and I tend to get funny ideas then. Usually the idea passes almost as soon it’s conceived - the surreal story snippet that I consign to my notebook, never to be seen or thought of again; or the urge for a run that disappears as soon as I open the curtains and look at the state of the world. But this one took a hold, and in this modern era of being able to buy whatever, wherever, whenever, I found myself on the first search result cackling away as I designed some tiny little Make More Care Less labels.

For the princely sum of about £16 I have 60+ labels (the site said I was buying 36 but I guess my text was shorter than the average? Accidental win there) which will let me label up A LOT of things. And I love them! It’s not just a symbol of I MADE THIS :D (although that’s most of the appeal), but sewing them in it feels like an official stamp of ’this project is now 100% complete’, which I’m finding very satisfying. Can definitely recommend.

While they’re primarily there for me, I will admit I’ve positioned a couple specifically so I can flash them if anyone shows the slightest amount of interest. Upside-down on the front hem of an otherwise very plain top, under the front button band of a wrap skirt - easily accessible but not too overt. I’m stopping short of putting them on the outside of items, though. For now. 👀

Now I’m off to sew these into ALL THE THINGS.