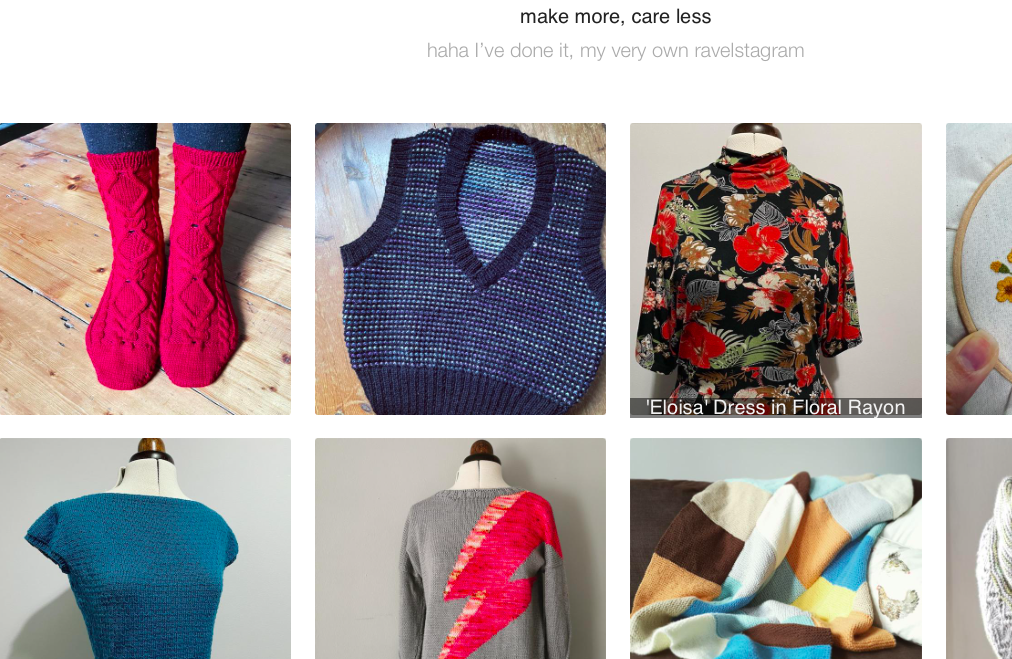 It’s time for the six-to-twelve-monthly flurry of activity on the website/blog front!

Since my last update post (Dream. Believe. Sparkle.), a fair bit has changed on here. I was woeful about the sad, dry website I’d ended up with and inspired to create something better, something more representative of me and my first love - making things 🧶 - while also giving me a playground to exercise my other love - being a massive nerd 🤓.

Here’s a summary of the changes since then:

My dream here was of a gallery that would auto-update with my favourite projects, with links to their associated posts, dynamically resizing to browser window with css maybe.

As shown above, nailed it!

I also turned it into a shortcode so I could add pics to posts with literally zero effort (I love zero effort).

The previous setup for list posts was very clean, with just the date and a title. But I’ve got to be honest; I need more clutter than that. So I brought in some lil thumbnails and summary text.

When I first put this site together I couldn’t get categories or tags to work; no idea why, but they have finally shown up and now both categories and tags pages are both fully operational (albeit not really linked from anywhere )

I initially wanted to have Makes in a separate menu from Posts as a sort of ~portfolio~ area; I couldn’t quite get it to work at the time so left it as it was, but this weekend I found the problem (a cheeky .md file I’d left in a random folder) and got the separation going again.

Something I really wanted was some breadcrumbs to allow for idle chronological browsing between projects, and links to other relevant posts. I was torn between going with categories or tags, but decided that categories would mean the few sewing posts only ever linking to each other, which wouldn’t be very interesting. So I went with tags, and added some more of those to each post so it has more to chew on.

That’s not bad but there’s def. more I can do. Partly on the data side of things - I need post stats, I need analytics stats, I need to look at my datalayer. And partly to fix up a few things that I know are a bit janky but can’t immediately work out how to fix.

The cloud weighing heavy over my head, though, is that I never did deal with the posts from my old Wordpress setup. I’m sure most of them will be garbage (I know I put up some shit recipes with terrible pictures before food blogging became A Thing) but there’s obviously a load of project posts I could add to the gallery. And maybe there’s some evergreen top tips posts (or rants) I can dust off.

I don’t have a full backup but I do have an xml file, so maybe a Python script could parse that so it’s a bit easier to work out what’s salvageable. And then another Python script to auto-generate post bundles, because that’s automation baybee 🙌.