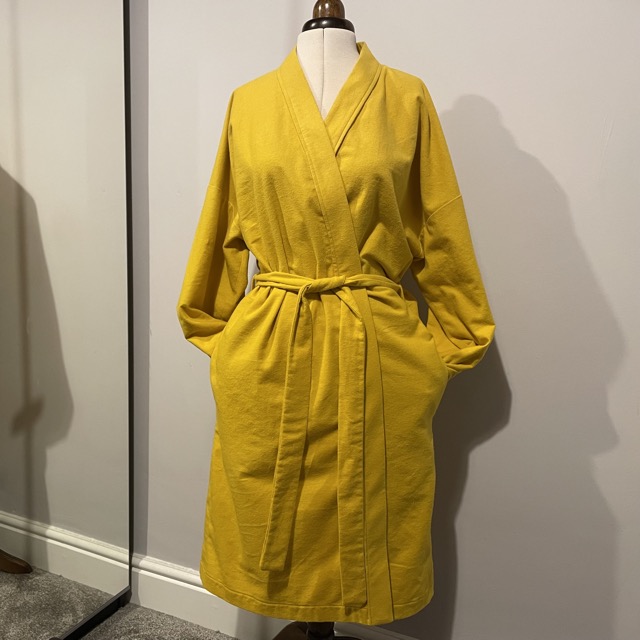 For years I’ve been thinking ‘I’d quite like a new dressing gown’, but because my old one wasn’t literally falling apart I kept talking myself out of it. But it cost like £15 from BHS 10 years ago, it was a grotty mauve-y taupe colour that made me a bit tired and sad just to look at, and what I’m saying is that did not spark even the tiniest amount of ✨joy✨. It was time for it to go.

I ordered in a pattern (Simplicity 1863) and - another project inspired by “Joyful” - a large quantity of bright yellow brushed cotton, and set to it. I initially thought a slinky silk dressing gown might be nice, but then I did a quick search, saw the prices, laughed hysterically, and hit the back button. My tendency to spill coffee down myself in the morning makes cotton a far better choice. Plus, it’s just a nice fabric; warm without being too warm, breathable, durable. A solid choice.

This was a dead easy sew so I don’t really have any comments about it. Well, other than that the ’two hour sew’ claim is an absolute lie, but that’s not particularly unexpected. If I were to make another one I might do fancier seams; I just trimmed the raw edges with pinking shears on this one. They’ve held up pretty well so far, but we’ll have to see how it fares on the first run through the washing machine.