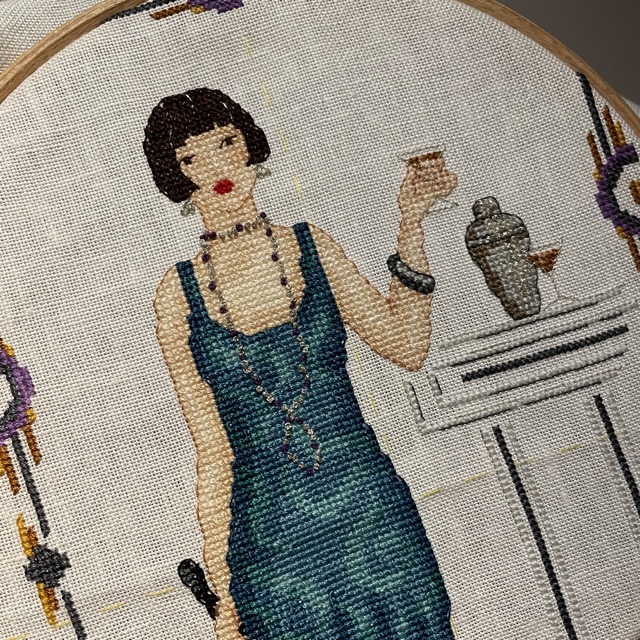 This one is an ancient WIP I found lurking in the depths of my craft stash, almost entirely forgotten. I was digging through my embroidery drawer looking for I’m not even sure what, and came across a suspiciously bulky magazine. Inside lurked this gal, unceremoniously taken from her hoop and folded in half between the pages of her pattern (note: don’t ever do that!!).

I don’t know exactly when I started her; but the magazine is definitely from before June 2007, so she’s been waiting for the rest of her for the best part of 15 years. Still not the longest it’s taken me from starting to completing a WIP, but pretty close 💀. And I’ll be honest and say I don’t know quite what made me start her. She doesn’t feel very me, design-wise. Landscapes and flowers are more my jam, natural things; so a character piece feels very… out of character. I mean I know it was me because I remember shopping for the floss, substituting the colours of the dress, writing out the substitutions and key on a scruffy little scrap of paper that I somehow managed not to lose over the intervening period. But it’s still quite strange.

Anyway, I picked her up and I couldn’t bear not to finish her. So I pulled out some poorly-stored floss and gave her her face (which was hilarious pre-backstitching), her drinks, and a nice purple fan. I wasn’t sure what to do with the border, but eventually settled on gold and brown to evoke the spirit of an old picture frame, such as might be hanging on the wall of a home or venue that might host the kind of fancy party she’s attending.

It was interesting after working on the bee to go back to a more rigid schema for needlework, if you see what I mean. On the one hand, less freedom. On the other, not so much freedom that I give myself eyestrain as I squint ferociously at the embroidery, trying to get the needle in the absolutely nanometre-perfect position. But, a benefit; I wasn’t horrified by the prospect of the French knots in her necklace. In fact, I was so unhorrified that I did them too early, which meant I had to resort to a teeny-tiny hoop to finish the border without crushing them.

Unfortunately, the crease from her being folded throughout her long abandonment seems to be permanent. Even after a good long soak and some vigorous pressing it’s still there. So, I repeat; don’t do that! Ever!!