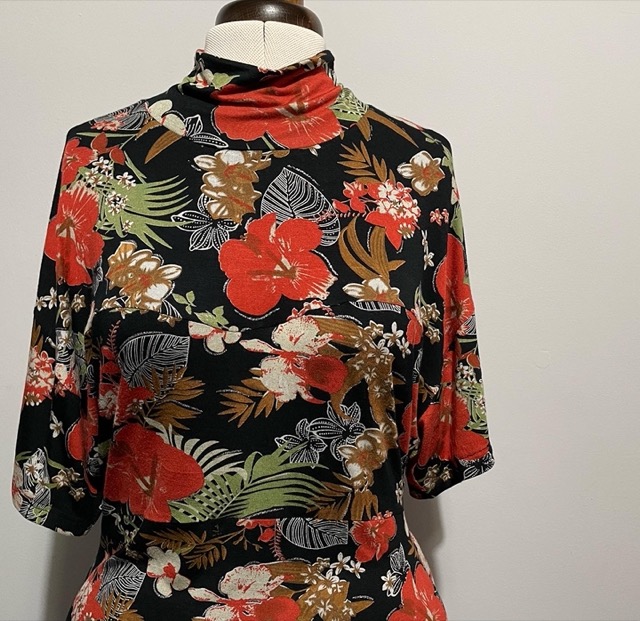 Last year I bought a couple of books by Named Clothing as a birthday present to myself. The basic premise of both books is giving you a base design and then different elements to switch in and out as you see fit; sort of a mid-way point between carefully following a pattern to the letter and self-drafting.

With this dress (Eloisa, from Building the Pattern), the core feature is the swooshy bust shaping which does exactly what a set of darts would do, but in a more interesting way. There’s a few different necklines and sleeves offered; for my version I went with:

What I was going for was elegant but casual; a bit too much for the office but you’re proved right when you end up in a wine bar later. What I got was that but also the most 70’s item I’ve ever made, owned, or possibly even seen in the flesh. So, a wine bar but with vol-au-vents and pineapple hedgehogs. Horrifying jelly-based concoctions that call themselves ‘salad’. Men called Peter with enormous fluffy hair in absurdly tight brown corduroy flares.

Okay that’s enough of that imagery. 😬

I did have real trouble finishing off the sleeves - I didn’t press them enough, I didn’t baste them enough, and my beloved sewing machine decided it didn’t really fancy doing any kind of zigzag/edging stitches. I’d do a section on scrap fabric and it’d be fine; then on the real thing it’d make horrible clunking noises and/or turn out to have made some kind of freestyle macramé on the underside. Not good. I managed to wrestle it into shape but the lines are very wobbly, which is a shame but whatever. Testament to my persistence in the face of adversity, or something.

Other than that everything came together really nicely. This is the first jersey-based piece I’ve made, and it wasn’t as difficult to work with as I expected (sleeves aside). Strongly considering an overlocker now though, as I want to work with more fancy fabrics and I don’t think I can handle the stress of trying to finish edges like this (and I don’t really fancy doing it by hand).

Note: A purist and/or perfectionist would probably say that the pockets don’t really fit; they spoil the line, etc etc. And they may well be right; but I will be flipping the bird at them from within my voluminous pockets and they will never know, so who’s the winner here really?